Scrap came to me when he was 12 weeks old. Actually he was adopted by my neighbor at a summer camp I was working at. I used to stop by everyday and hang out with him. He seemed like a pretty scrappy pup, so that’s what I called him. One day my neighbor told me she couldn’t keep him and that began our life together. And that’s how his name stuck.

Scrap was sort of like that tough, obnoxious friend we all have…kind of a jerk to most other people. But in the end you are sure glad he is YOUR friend. He was smart as a whip and knew what he wanted and what he didn’t want. The first time I picked him up he tried to bite me…so I thought “OK he doesn’t like to be picked up” and we didn’t do that anymore.

But we were best of friends from moment one. Living outside at a summer camp he followed me everywhere. If I went inside somewhere he would sit and wait for me by the door. He was loyal like no other.

Scrap had unique talents. A great frisbee-dog in his day. A retriever of almost anything, including rocks. He would dive under water and come up proud and victorious with rocks in his mouth. He loved treats, food, and even things that seems like food (like toothpaste). He was truly a scrappy dog and at all times made every effort to break into any garbage can, food bowl, or a purse with mints inside. He one time got a hold of a giant jar of peanut butter, untwisted the cap, and ate the entire thing. That really wasn’t a win for anyone.

Scrap had the things he liked and also the things he didn’t like. Namely skateboards, vacuum cleaner (ours was covered in bite marks), shovels, doorbells, dogs in clothes, and people who talked with their hands or laughed to much. Like a true herder, he always needed to be in control. And wasn’t beyond nipping a heal to prove his point.

But under his rough exterior he was the sweetest dog I have ever met. He loved to curl up on the couch and put his soft furry head on my shoulder. In my dreams Scrap always spoke in plain words. And I always sort of expected one day he really would turn to me and say “hey buddy why don’t we have an early dinner tonight”.

He was with me at college in Vermont, after college in California, back home in Chicago, when I was single. And he was there when I got married, and when my son was born. He was my best travel companion as we road tripped cross country together more than 10 times. He was my pup, my buddy, and I will miss him forever. I know that where ever puppy souls go, he is spending his days gorging himself on cookies and terrorizing vacuum cleaners. 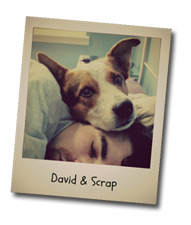 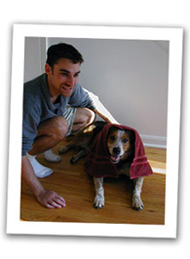